The winter sports seasons are winding down which means the state tournament season is heating up!  Find information about each sport below(listed in order by Sectional date):

Franklin qualified five individuals for the IHSAA State Finals.  With all five finishing 3rd or 4th the week before, the path was not going to be an easy one.  Unfortunately all five wrestlers fell in their opening round matches to end their season one step short of the state medal rounds, but that does not dim the outstanding performances of these athletes all tournament long.

At the Semi-State competition, five of the seven wrestlers representing Franklin advanced to the IHSAA State Finals!  Jake Bechert and Jacob Johnson both finished 3rd in their weight classes while Tyler Fuqua, Harris Eason, and Nolan Skaggs all suffered defeats in their final match of the day to finish 4th.  Jalen Ward won his opening match of the day, but fell in the ticket round to end his stellar career.  Caleb Wyss dropped his opening match to end his season.  The wrestlers are back in action next Friday at Bankers Life Fieldhouse.  Every wrestlers has one match on Friday.  If you win you're assured a state medal and a full day of wrestling on Saturday.  If you lose your season is over.

The wrestling team finished 4th at the highly competitive Mooresville Regional.  7 of the 10 representatives earned an opening match win to qualify for next weekends Jasper Semi-State.  Tyler Fuqua backed up his individual Sectional championship with a Regional title at 170 pounds.  Also advancing for the team were Caleb Wyss (4th at 120 lbs), Jake Bechert (3rd at 126 lbs), Jalen Ward (Runner-up at 182 lbs), Harris Eason (3rd at 195 lbs), Nolan Skaggs (Runner-up at 220 lbs), and Jacob Johnson (4th at 285 lbs). 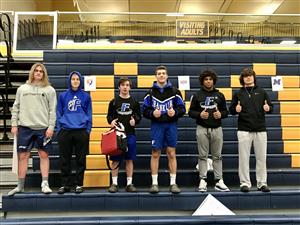 For live results, visit Trackwrestling.com. Click on "Events", then click "Search Events" and type IHSAA in the Event Name box.  Scroll down until you see the State Finals.  Click the link and finally select "Enter Event".

Streaming is provided through the Track Wrestling website.  Championship matches will be televised on Fox Sports Indiana.

The Lady Cubs traveled to Jeffersonville for the Semi-State to play Brownsburg with a trip to the IHSAA State Finals on the line.  The Lady Cubs put up a valiant effort hanging close with the Bulldogs through the opening half.  A tough 3rd quarter allowed Brownsburg to get separation and open up a 15 point cushion heading into the final quarter.  The deficit was too much for the Lady Cubs to overcome and a fantastic season came to an end 49-27.

Following their Sectional win, it would have been easy for the team to take a deep breath and enjoy the ride.  They were on their way to Bedford North Lawrence for the Regional and an unfamiliar foe in the Castle Knights awaited in the semi-finals.  Instead, the Lady Cubs went on a business trip and not only defeated the Knights in the late game of the morning session, they came back about 6 hours later and defeated the #3 ranked BNL Stars on their home court!  It was the program's first Regional title since 1999 and its first as a 4A school.  The championship also prevented the Stars from claiming their 14th Regional championship, which would be the most by any school in the state.

In the semi-final, the Lady Cubs used a balance attack to overcome a four point halftime deficit and pull away in the final minutes of the game for a 51-44 win.  Freshmen Lauren Klem and Scarlett Kimbrell led the way with 11 and 10 points respectively.  Seniors Kyra Baker and Lauren Sandrock both chipped in 10 and 7.

In the final the team's leading scorer, junior Kuryn Brunson, found her groove and carried the offensive load accounting for 24 of the team's 51 points.  After holding slim leads at the end of the first half and third quarter, the Lady Cubs found themselves trailing the Stars by three with less than 90 seconds to play.  Another freshman, Erica Buening hit a huge 3-pointer to tie the game.  Back and forth they went over the final 1:13.  Neither team able to get the key stop to get separation.  That's when Brunson put the team on her back.  She gave the Lady Cubs the lead at the free throw line with 11.8 seconds to play.  On the ensuing possession, she got the steal and two more free throws later, it was 51-48!  The desperation 3/4 court heave by the Stars was a little close for comfort, but again, Brunson's defense didn't allow the shooter to get full extension and the ball bounced harmlessly off the backboard.

The Lady Cubs now advance to play Brownsburg, which knocked off #1 ranked North Central and Mount Vernon, the Lady Cubs' first opponent of the year, to clinch their spot in the Semi-State.  The Semi-State is a one game playoff. Win and you advance to the State Finals.  That game will take place Saturday February 20 at 5:00 pm at Jeffersonville High School.  Scroll down further for ticket information.

The Lady Cubs basketball team won its first Sectional championship since 2008.  The Lady Cubs opened with a victory over Shelbyville, 77-43.  In the semi-finals they held off a determined Greenwood team and pulled away late for a 68-31 victory.  In the final, the Lady Cubs faced off with Center Grove.  The two teams played to a 30-29 Franklin victory earlier in the season, but the Cubs had to hold off the Trojans in the final possession to secure the win.  The Sectional final carried similar drama.  The Trojans jumped out to a 9-3 lead before Franklin's potent offense started to kick in.  Powered by junior Kuryn Brunson, Franklin claimed a one-point half time lead and at the end of the third quarter the game remained tight 28-26.  Early in the fourth the Lady Cubs started to take control, taking a 7 point lead with just under 6 minutes to play and that lead then pushed a little higher and hovered around 10 for the last 4 minutes of the game.  The final score was Franklin 46, Center Grove 37.  Brunson led the Lady Cubs with 20 points and freshman Scarlett Kimbrell also topped double figures with 14.

Ticket Information: Please note, each school is limited to 500 fans.

At the IHSAA State Finals, the Lady Cubs were looking to bring home their a top 5 team finish for the fourth consecutive year.  It would not be easy, but they were represented in all but 1 event with opportunities to make several championship finals.  After Friday's prelims the stage was set for another assault on greatness!

Freshman Camy Quiggins got the day off to a great start in the diving competition.  She barely squeaked into the semi-final round, sitting in 19th. Only the top 20 advanced.  After 3 more semi-final dives, Quiggins moved up to 16th, which was the final position that advanced to the final 3 dives.  She moved up one more spot to finish 15th and pick up 2 points for the team.

Several hours later the swimmers took to the pool and the hardware parade began.  In the 200 Medley Relay team of Allie Lacy, Kabria Chapman, Grace Fisher, and Gracey Payne placed third to shoot the team toward the top of the leaderboard.  Then Paige Lawrence swam a solid race in the consolation heat of the 200 freestyle to bring home a 14th place finish.  Next it was Lacy, hopping right back into the pool and gutting out a 5th place finish in the 200 IM.  Then it was Payne moving up a spot from her prelim seed to bring home 7th place in the 50 Freestyle and the Lady Cubs hit the intermission in 4th place.

When the action started back up Gracey Payne got the medal count ticking up with an 8th place finish in the 100 freestyle, her second individual medal of the day.  Lawrence again swam a solid consolation heat of the 500 freestyle to improve her prelim seed and finish 12th!  In the final consolation race for the team, the 200 Freestyle Relay team of Gracey Payne, Kabria Chapman, Paige Lawrence, and Alea Hensley finish 2nd in the consolation heat to place 10th overall.

Big points were on the table in the final three races of the day and the Lady Cubs cashed in.  Allie Lacy picked up her second individual medal with a 7th place performance in the backstroke.  Kabria Chapman put out a gutsy performance in the 100 breastroke, going to the lead at the halfway point and hanging on for a 5th place finish. Finally with final team positioning at stake the 400 free relay team of Allie Lacy, Paige Lawrence, Alea Hensley and Grace Fisher finished 8th and secured a 5th place team finish!

On Friday evening, Camryn Quiggins finished 4th in the diving competition to qualify for the Jasper Diving Regional.  She entered the Regional competition as the 10th seeded diver, but finished 6th at the Regional to advance to the State Finals (top 8 overall advance). The diving portion of the state finals will be Saturday at 9 am.

The Boys Swimming and Diving team reigned supreme again at the 2021 IHSAA Sectional.  They outdistanced runner-up Center Grove 488.5-430.  The Grizzly Cubs claimed Sectional championships in seven events, which automatically qualifies for that event in the State Finals.  Sectional Champions for the Grizzly Cubs were:

Qualifying for the State Finals by hitting the automatic state cut times were:
100 Freestyle: Ethan Pheifer
100 Backstroke: Ethan Pheifer
100 Breaststroke: Albert Nusawardhana
Qualifying via the Callback system was Anthony Ries in the 200 Freestyle and 100 Butterfly and Barrett Daily in the 200 IM and 100 Breaststroke.
Advancing to the Diving Regional Tuesday at Jasper High School were Drake Keller and Gavin Crouse. At the Jasper Diving Regional Drake Keller turned in a score of 429.95 to finish 6th and punch his ticket to the State Finals (top 8 advance).  Fellow sophomore Gavin Crouse finished in 19th position to wrap up his season.
Like the girls IHSAA State Finals, the Friday preliminiary round will be split into two sessions.  This time the Grizzly Cubs will be competing in the noon session.  After the 5:30 session, the results will be combined and the top 8 times from the day qualify for the championship final and positions 9-16 qualify for the consolation final.  All of the IHSAA State Final action can be purchased and streamed through IHSAA.TV. 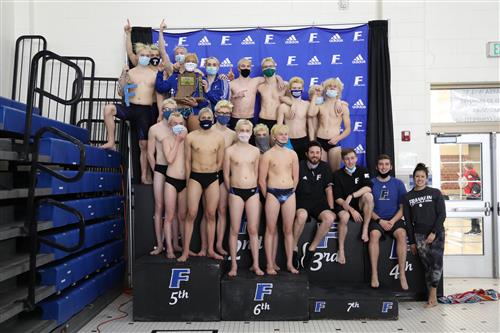 Prelims: Friday at Noon and 5:30.  Franklin Sectional qualifiers will participate in the noon session.

Diving Prelims and Finals: Saturday at 9:00 AM